Broadcast Audience Research Council's (BARC) TRP report for the 22nd week is finally out. And it will come as no surprise that Rupali Ganguly and Sudhanshu Pandey-starrer Anupamaa has maintained its top position. The TV serial which is immensely popular in Indian households has built a strong viewership record amongst small screen enthusiasts. It is based on Star Jalsha's Bengali series Sreemoyee.

With over 9k impressions, Anupamaa has been on top of the list followed by Ghum Hai Kisikey Pyaar Mein, Imili, Taarak Mehta Ka Oolta Chashmah and Super Dancer Chapter 4.

Despite a lot of controversies in the recent past, Indian Idol 12's ratings were dropped and as a result, it did not get placed in the top 5. The singing reality show has been making headlines after the Kishore Kumar special episode.

The legendary singer's son Amit Kumar was invited as a guest judge in one of the episodes during which he alleged he was asked to praise the contestants, irrespective of how they performed. Kumar created headlines with his claims and many including show host Aditya Narayan refuted what he said. 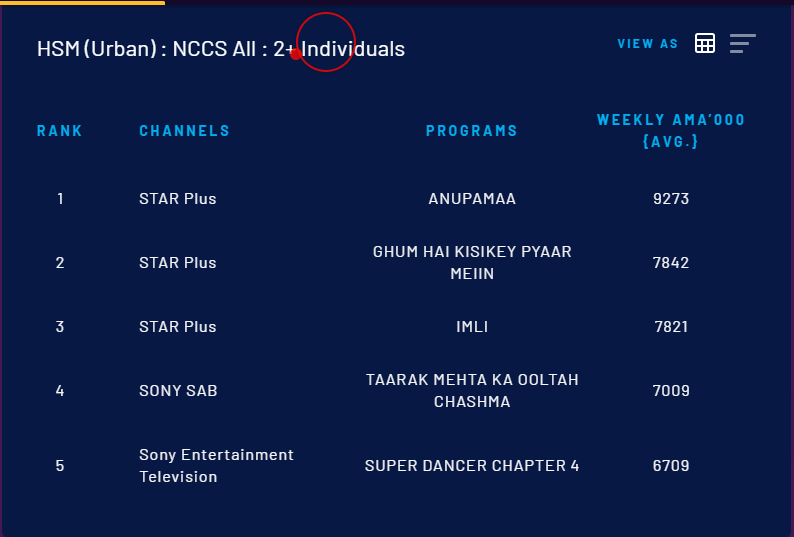 While Anupamaa continues to rule the TRP chart, Ghum Hai Kisikey Pyaar Meiin was ranked number 2 with a total of 7842 impressions. The series is a remake of Star Jalsha's Bengali series Kusum Dola. It stars Ayesha Singh and Neil Bhatt.

One of the longest-running Indian shows, Taarak Mehta Ka Ooltah Chashmah was placed on number four with over 7k impressions. Despite lead actress Disha Vakani aka Daya ben's absence from the last couple of years, TMKOC continues to be the top favourite of the Indian audiences. Produced by Asit Kumarr Modi, it first premiered in July 2008.

Dance-based reality show Super Dancer Chapter 4 managed to earn a spot in the top 5. With 6709 impressions, Super Dancer Chapter 4 is judged by Bollywood actress Shilpa Shetty Kundra, Geeta Kapur, and Anurag Basu. Shilpa who was away from the show for nearly three weeks, received a warm welcome from co-judges and participants recently. She also went on to celebrated her birthday on the sets.

Stay turned to this space for more updates!